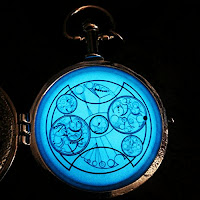 Posted by Unknown at 4:18 am No comments:

It's official, there are now over 1,000 Doctor Who fan audio plays out there in the wild. With no sign of letting up. Even better, it's all being shared freely for the love of creativity, expression, and seeing just how far we can muck up continuity in the Whoniverse.

Whilst Mr Eccleston remains an elusive catch for Big Finish, fans are trying to fill the void. Cold Open has been making a splash with Pete Walsh's uncanny Ninth Doctor impersonation. Solid audio quality, a story following right on the heels of the Time War, and the announcement of two more episodes. Gotta be worth a look, right. Stream here https://www.spreaker.com/show/doctor-who-the-ninth-doctor-adventures. And check for updates https://twitter.com/9thDrAdventures.

Beermat Productions have been putting out some of the most unique and interesting material of late. Adding to their already eclectic catalogue of audio entertainment. Last year Just Another Drill created additional events for the classic TV story Warriors of the Deep. This year they've done it again with The Darkling Man: A Moonbase Interlude and The Halmstadt Troll, which works as a prelude to The Mind of Evil. If that wasn't enough they have a short series of UNIT audiobooks related to their UNIT Fannual. And it's worth highlighting the wonderful soundtracks they've released on youtube. More info at http://www.beermatproductions.co.uk

The Doctor Who Audio Dramas (DWAD) has for a long time been the go to place for in depth historical settings. The Labours of Travellers is a four part story set during Stalin's Soviet Union. The clash of workers and politicians. Plus mysterious goings on around a warehouse mining for unknown minerals, creatures in the shadows, and a problem with time. http://www.dwad.net/

Another series that has been steadily releasing episodes over the last year is the Doctor Who Audio Adventures. Featuring the Doctor's imprisonment, Cybermen, Victorian London and more. Now up to their sixth audio Parallelity. https://www.youtube.com/channel/UCZBzhApELuQ33HPyE2VUnpw

Jumping back to around the Xmas period a story came from one Gallifreyan Morse (also known as Doctor Puntastic). It's a Twelfth Doctor adventure in two parts with companion Clara Oswald. Set amongst a series of kidnappings in New York. Of course things will not be as terrestrial as they seem. Listen to The Unadmired Dawn at https://soundcloud.com/doctor-puntastic

A series of short audios were released on Saxby's Youtube channel at the end of last year. If you want to take a listen follow the link. https://www.youtube.com/watch?v=-PxthTzFyaA&list=PLEa1frpbkA4Bffwuz1YY6N0JsBIpgepqz

There are some even older audio plays that I'm adding to the database, that were missed for whatever reason at the time of release. Dream Realm Enterprises got started on season four of their Doctor Who series back in July 2017 with two more stories - Purity and The Time That Was. Hopefully we'll see another release from them this year. http://dreamrealmsite.com/DrWhoMain.html


That's all for now but there is a fast growing list of audios to be added to the site. Expect more in the not too distant.

Posted by Unknown at 1:09 am No comments:

Hello all. The audio community has been busy. And it's finally time to reflect that here on Nerva Beacon. In fact, so many different producers have been getting creative that it's going to take more than one post to keep things up to date. So this is your first batch of audio plays that you may have missed. Expect lots more to follow soon.

Darker Projects has returned to producing their longstanding Doctor Who series, having released episode 7 of season 4. Salvage Wars Part 1 finds The Doctor and companion Emma in the midst of battle in World War II. Then aliens. Catch up on the whole series on their site. http://darkerprojects.com/doctor-who/dw-season-04-ep-07-salvage-wars-part-1/

5 Who Fans continue their aimless wanderings into the humorous side of Who. Giving us a feature length audio in The Pompous Redemption. Where the Doctor spends time living in isolation until an old friend seek him out. http://www.aimlesswanderings.co.uk

To prove how behind I am on updates here's a couple of Xmas releases. The first comes from Doctor Who Velocity. Following hot on the heels of their visually impressive fan film, it's a lighthearted jaunt involving the search for a Dalek. https://www.youtube.com/watch?v=Bl8bBshsiQc

Next up are Master Whovians. Who rounded off their full series of audio plays with Pack Up Your Troubles. As the TARDIS is in poor health the Doctor and Emma travel between different conflicts and timezones. https://www.youtube.com/watch?v=JsETbwofgIY&t=1s

The Afternoon Tea Adventures confidently completed their debut story Widen Your Gaze. An atmospheric period piece in 1950s England. If you like a well acted slice of sci-fi mixed with supernatural themes then check this out. Get all three episodes here - http://www.afternoonteaadventures.com

Meanwhile, The Sarah Jane Adventures wrap up their epic story Archangel. Fancy revisiting Saxon, Harriet Jones, UNIT, and a host of monsters and threats. It's all here over five substantial episodes. https://www.youtube.com/watch?v=AVC2yUom3hE&list=PLi34ezq9WWzXSwPwz6V-pl8U_jehnTGEz

More updates on the way...

Posted by Unknown at 4:57 am No comments: