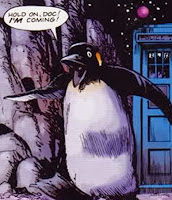 There’s a new producer on the block. Afternoon Tea Adventures has released part one of their first Doctor Who story - Widen Your Gaze.

“The Doctor and Julia are being followed by something inexplicable and inhuman, and in a deserted station along a lonely coastal railway line a ghost train is waiting for them.”

It’s a good quality production with mystery and general Doctor Who peculiarness.

“When the TARDIS takes him to Lower Saxony in 1284, he is surprised when he comes face to face with a strange plague afflicting the young of Hamelin. Though what he initially thinks is a terrible illness turns out to be something much worse.“


Following on from their first season of stories, Master Whovians have released a minisode, The Trip of a Lifetime. Plus they are gearing up for an Xmas special, Pack Up Your Troubles.

Episode and trailer at https://www.youtube.com/channel/UCLAaZ9EwkkiLVpyXKi7k-DA


The adventures of Sarah Jane Smith continue in Archangel. Sarah investigates the deaths of a family killed in a house fire. Murder and connections to Torchwood soon arise alongside a much bigger story.

That's another batch of fan fun for you all. There could be more productions out there that haven't shown on my radar yet, so drop me a comment if you know of anything. I will endeavour to have a thorough search for new material in the near future. In the meantime keep your ears peeled for some Xmas releases.

Posted by Unknown at 1:18 am No comments: